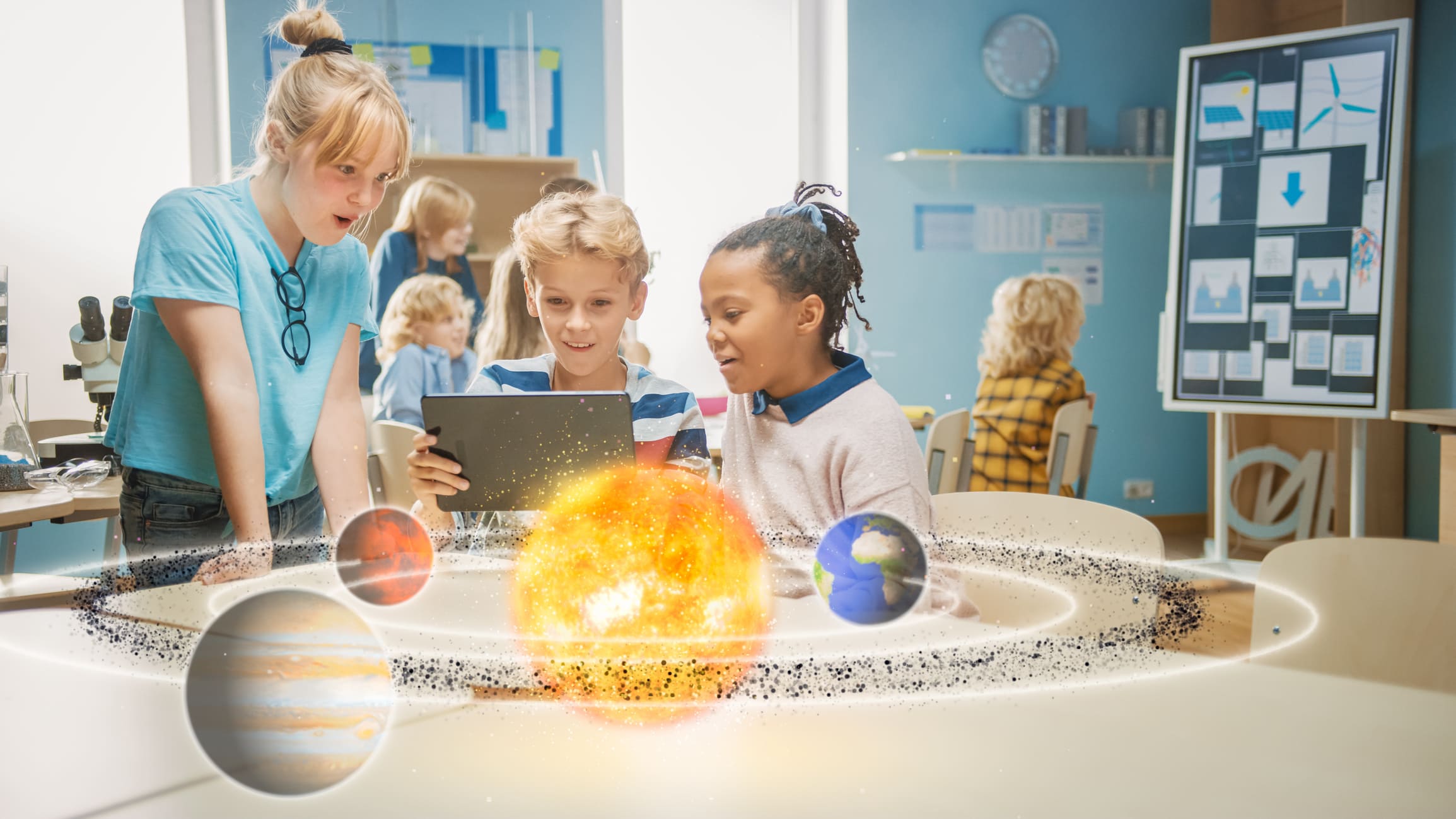 Something unprecedented is happening in the realm of education and training. Teachers are turning into epic storytellers. Medical students are tracing the movement of blood through veins and arteries in real time. Piano students are playing along with their favorite bands virtually, and school pupils are launching into space. Education as we know it is changing. Concepts and ideas are leaping out of book pages and off blackboards, coming alive in breathtaking shapes and forms. Look under the hood, and you’ll see the engine powering the revolution – 3D and augmented reality (AR) tech – quietly taking the education sector into exciting new directions.

What makes 3D and augmented reality (AR) a natural fit for education?

3D and AR blends physical and virtual realms to enhance students’ perception of the real world. 3D and AR takes elements from traditional education – such as text books, diagrams and illustrations that are universally used in education and training – and adds an extra layer of ‘experience’ to it in the form of information-rich graphics, video and animation, text, sound and special effects. Sensors and cameras capture objects from the physical environment, overlay them with digital elements via projection mapping, and create a unique hybrid output that’s part real, part virtual, and altogether unforgettable. Not to be confused with virtual reality (the 100% computer-rendered version of mixed reality which plays out in a digital realm), 3D and AR crucially retains a connection to the real world, thus deepening – instead of replacing – the learners’ understanding of ideas and concepts they come across in their studies.

3D and AR crucially retains the connect with the real world, thus deepening – instead of replacing – the learners’ understanding of arguments and concepts they come across in their studies.

The stats concur. Surveys predict that the market for 3D and AR will reach USD 88.4 bn by 2026, with 4.3 bn users by 2025. Of them, Gen Z  and the Alpha generation – the current and emerging student demographic – are already fans of the immersive narratives that are characteristic of 3D and AR. Numbers reveal the magic is working across education formats and channels such as classrooms, workshops and training sessions; 80% of students were more likely to attend class when it featured 3D and AR in some way, with 70% confessing that it helped them grasp concepts quicker.

80% of students were more likely to attend class when it featured 3D and AR in some way, with 70% confessing that it helped them grasp concepts quicker.

So what exactly makes the match between education and 3D-AR so organic and seamless? Simple – 3D and AR works at the root of the psychological process humans call learning - stimulating, complementing and accelerating the process.

3D and AR works at the root of the psychological process humans call learning - stimulating, complementing and accelerating the process.

What are the benefits of augmented reality in education?

Out of all the information transmitted to the brain, 90% is visual. Visuals are known to stretch the human ability of critical thinking and problem solving, markedly improving absorption, analysis and comprehension. With visuals forming its core, 3D and augmented reality in education comes tailor-made as a learning catalyst and training supertool.

3D and AR turns learning into a hands-on experience

Humans remember best when they do. Experiential, DIY type learning based on active practice is engaging, personal and lasting. It activates multiple connections in the brain, and encourages the application of knowledge towards better insight, reasoning and skill building. With its participative nature, 3D and AR compels users to move objects around, add new context and experiment with appearance, which adds the all-important action factor to the education experience.

Familiarity breeds apathy. Humans are wired to remember experiences that are novel. A departure from the norm rejigs brain paths, brings down stress levels and releases dopamine; the hormone responsible for associative learning. With its ability to create jaw-dropping visual experiences, 3D and AR not only ticks this box effortlessly, it also creates highly sharable social moments that elevate the joy of collaborative learning.

The traditional classroom as we know it is no more. Examples and instances of 3D and AR-driven learning

‍Google expeditions is taking pupils on a fascinating trip across time and space, capturing the hidden backstories of faraway galaxies, landmark scientific discoveries and iconic cultural moments for an unforgettable day at school. Students of disciplines as diverse as life science, geography and chemistry are rotating, zooming and analyzing fossils, skeletons, dinosaurs, waterfalls and atoms in virtual labs that are reverberating with gasps of astonishment.

3D and augmented reality in education is taking medical training by storm. It is placing students in the front seat as they examine the human body – from the pumping of the heart to the working of the brain and everything in between, right down to the cellular level – via 3D modelling.

Studies have established a positive impact of using 3D and AR in surgical education and skill acquisition, particularly in areas like multitasking, bimanual operation and hand-eye coordination. Virtual patients and remote access to operating theatres are taking the risk out of surgery training and drills. For instance, surgeons can now use Microsoft Hololens to understand patient anatomy prior to incision, with 3D and AR guided navigation allowing for never-before levels of control and accuracy.

3D and AR enabled approaches have been steadily gaining traction in engineering education – primarily in niches like electronics, technical drawing and construction – elevating learning parameters like engagement, test-runs and academic performance. Engineering students are visualizing and designing with never before confidence. The University of New Mexico's schools of Architecture and Engineering are leveraging 3D and AR renderings to create immersive scenarios that help students take better decisions.

In creative disciplines such as painting, writing, music, theatre and film, studies show that 3D and AR promotes inclusive and active learning, pushing the boundaries of creativity in education with better motivation, engagement and feedback.

Virtual storytelling via animated graphics in 3D and AR tech – powered by artificial intelligence and machine learning – is letting students learn new languages without the need for real-life interactions with strangers. They can now eavesdrop on conversations in cafes, workplaces and homes from the privacy and convenience of home, making for unparalleled cultural immersion in the process.

Vocational training and professional upskilling – a vital cog in any nation’s economic roadmap – is clearly entering the next level with 3D and AR. Organizations are revamping their approach to training, substituting paper manuals and mono-dimensional lectures in favor of 3D models, immersive hand holding and real time virtual simulations. Workers are  looking at old problems through fresh new perspectives to arrive at more efficient  methodologies as they advance up a mobile and memorable learning curve that, importantly, ticks critical safety parameters.

A recent Deloitte report has shown that 88% of medium-sized companies are already using 3D and AR to skill and train up employees – be it precision assembly in the auto and manufacturing industry, patient diagnosis and treatment in the healthcare and medical industry, troubleshooting and remote assistance in the service industry, simulated dry-runs in the construction and logistics industry, or dangerous and high risk scenarios in realms like defense, disaster management, fire-fighting and crowd control.

As the cost of attending a physical campus is increasing worldwide, 3D and AR is bridging oxford the gap between learners and instructors. Low barriers to entry – both in terms of technology and cost (the version by Enhance 3D and AR Solutions, for instance, only requires an internet connection) – is giving a boost to distance learning frameworks, even as apps like CoSpaces and 3DBear allow tutors to organize immersive virtual classes, workshops and tours.

The final frontier of space has also been conquered. NASA is actively exploring how 3D and AR can help accomplish research missions more smartly, and inspire the next league of astronauts.

This is just the beginning

With quicker learning curves, the ability to handle varied workloads and higher academic outcomes, 3D and augmented reality in education is giving its biggest ever makeover. The spatial visualization ingrained in 3D and AR sequences reduces cognitive load measurably by allowing data to be processed through additional cognitive channels in the learner’s mind, unlocking new ways to absorb and imbibe. From MIT to Oxford to Caltech, leading educational establishments are waking up to the transformative wonders of 3D and AR.

From MIT to Oxford to Caltech, leading educational establishments are waking up to the transformative wonders of 3D and AR.

That said, what we are now witnessing is merely the beginning. With 5G cellular networks launching now, and with 3D and AR poised to fuel the looming metaverse explosion, it is clear that augmented reality will become more and more inseparable from global education frameworks.

With 5G cellular networks launching now, and with 3D and AR poised to fuel the looming metaverse explosion, it is clear that augmented reality will become more and more inseparable from global education frameworks.

How companies are implementing augmented reality in manufacturing